What are Treasury Bonds?

The investment horizon of government-backed fixed-income securities can span from less than a year all the way up to a 30-year maturity date. Those longest-term investments are Treasury Bonds: fixed-income securities issued by the U.S. Treasury with maturities ranging from 10 to 30 years. They have a coupon payment every six months and are an attractive investment not only for their consistent payments, but also for their face value in secondary markets.

Treasury Bonds are an integral part of the United States’ financial economy. Bonds not only help finance critical infrastructure projects, they’re also a benchmarking tool for measuring the current economic climate. And while their low rate of return makes them an uninspiring investment for many, they’re exactly the conservative play many retirees want.

Here’s a closer look at Treasury Bonds, how they work and their role as not only fixed-income investments, but as government-backed securities. 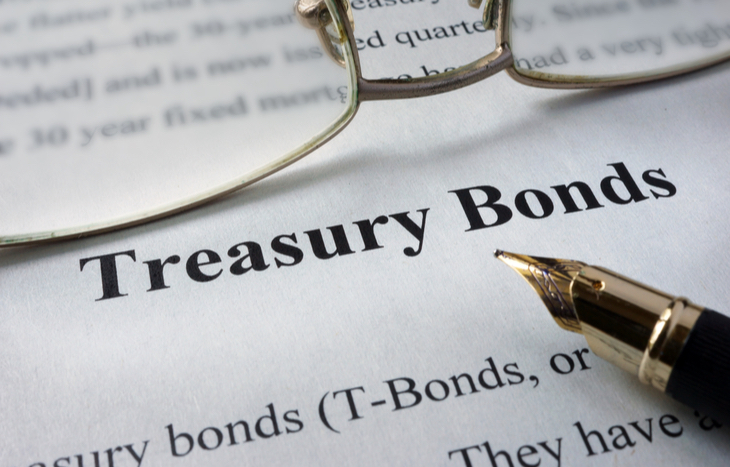 How do T-Bonds Work as an Investment?

Treasury Bonds are available in increments of $100. They’re sold at par (face) value and pay a fixed interest amount every six months. Bidders determine the interest rate through an auction process in primary markets (more on that below). Whoever holds the bond is entitled to the interest payments and can redeem the bond for its face value at the point of maturity.

Speaking of maturity, T-Bonds are the U.S.-backed security with the longest time horizon. These Treasuries have maturities of 10 to 30 years, with the most common being the 30-year Treasury Bond. For this reason, they’re most commonly held by institutions and retirees seeing a source of passive income that’s both safe and tax-advantaged.

How to Calculate the ROI of a T-Bond

If you acquire a T-Bond through the secondary market, it’s important to look at carrying value as the forward-looking ROI. Carrying value is the amount of value left in the bond until maturation. To determine this, add the remaining premium to be amortized to the face value of the bond.

The Chief Benefits of Treasury Bonds

Treasury Bonds are extremely popular as fixed-income securities and conservative investments in a balanced investment portfolio. They’re virtually infallible investments, backed by the full faith and credit of the United States government.

As fixed-income securities, they provide regular interest payments every six months. Moreover, these payments are tax-free at the state and local levels, but taxed at the federal level. Many retirement portfolios use Treasury Bonds to boost passive income.

Beyond direct investment tools, Treasury Bills are something of a benchmark for other financial products—including mortgages and other personal lending products. The interest rates tied to these products is the result of bidding, which can indicate economic confidence or trepidation.

How to Purchase T-Bonds

Treasury Bonds come directly from the United States Treasury, which offers bonds via auction, open to competitive and non-competitive bids. Bond auctions take place weekly, facilitated by 24 authorized primary dealers. Auctions establish the price and yield of the bond, and the type of bid determines how the investor acquires the bond.

After bidders set the interest rates for T-Bonds, they can then trade or sell them after a 45-day holding period. Selling and trading open up the secondary market, where they’re available for purchase through banks and brokers. Through these channels, investors purchase bonds with an established coupon price, at face value.

Like most investment products, T-Bonds trade in secondary markets. They sell not only on face value, but also on coupon rate and carrying value. Bonds selling above par value do so at a premium and likely because of their carrying value. Bonds selling below face value trade at a discount. This market is constantly in flux depending on the bond yield curve. Bonds don’t trade on exchanges; they’re available through OTC channels.

A Barometer for the Broader Economy

For many decades, the 30-year Treasury Bond was a bellwether of the economy. Today, 10-year Treasury Bonds tell the tale of economic health and financial prosperity. Investors and financial institutions look to these products because their interest rates hint at the level of confidence investors have. When yield rates are low, it’s a sign of strong markets; when they’re high, it means investors are flocking to safer holdings.

And you can utilize these bonds as a form of income in retirement. To learn more, sign up for the Wealthy Retirement e-letter below.

For many investors, Treasury Bonds are a risk-free source of passive income in retirement years. They’re also a long-term hedge against volatility. No matter how they’re viewed, U.S. Treasury Bonds are an integral part of the economy, as both an investment tool and economic barometer.