What are Convertible Bonds?

Companies can raise money to run their businesses in many ways. Sometimes a company will raise equity. When they raise equity, they sell a portion of the business to a new partner or issue shares to the public in an IPO. The companies can also raise money by issuing bonds, and a less common way is through a convertible bond. If the company issues bonds, they’re borrowing money from the bondholders. Interestingly, a convertible bond has characteristics of both bonds and stocks. 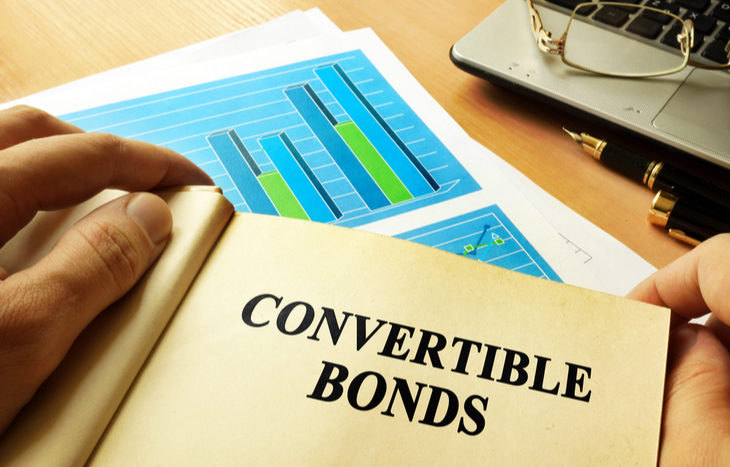 What Are Convertible Bonds and How Do They Work?

Convertible bonds are hybrid securities. When a company issues this bond, it starts like a bond. The company pays bondholders a coupon rate based on its credit rating. After that, the convertible bondholders can convert the bond to the company’s common stock.

Essentially, this bond is like a typical non-convertible bond plus a call option on the stock.

For example, say you bought a standard bond for $1,000, paying a 5% coupon rate. Later, you want to sell your bond. If rates have decreased in the bond market, your 5% bond will be very attractive to buyers. They will be willing to pay you more than your original $1,000 investment.

Conversely, your 5% bonds will not be competitive with other similar bonds with higher coupon rates if rates have gone up. Buyers will not be willing to pay you $1,000 for your bond.

On the other hand, a convertible bond’s price changes with interest rates and conversion options. In addition to price changes due to changes in interest rates, the price can change if the stock changes. For instance, if the underlying stock rises way above the conversion price, the bond price will also increase.

When to Convert a Convertible Bond

However, if the stock surpasses $250, your investment return from converting the bond and selling the shares will be higher than if you held the convertible bond until it matures.

In addition to getting coupon payments, the bondholder can earn a higher rate of return if the stock goes up. Keep in mind that convertible bonds might pay a lower coupon in exchange for bondholders’ potential benefit from the converting.

In a scenario where the bondholder doesn’t convert the bond, the bond’s price will likely go down. If this happens, the convertible bondholder can still hold the bond until it matures and get the original $1,000 investment.

In a worst-case scenario, the company goes bankrupt. In bankruptcy, convertible bondholders are in line before common stockholders. That means they will get any proceeds from selling the company’s assets before stockholders.

What are Treasury Bonds?

How do Bond Ratings Work to Determine Credit...

What are Bond Futures?

What is a Bond Valuation?

What are Bond Funds?

What is a Callable Bond?